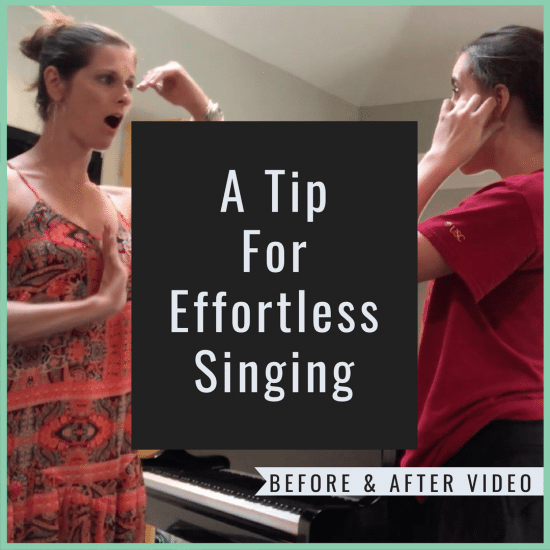 It’s so awkward being at a show and watching a singer work really, really hard. You see their neck veins pop out, their breaths are gasping and labored as they push and squeeze the phrases out. They have no idea how to sing without strain and it’s exhausting to watch. Have you seen a singer like this? Nothing is worse. Well, I take that back. . . .there is something worse. . . . . BEING that singer who’s pushing, squeezing and otherwise working  waaaaaay too hard. Not only does it alienate your audience, it just doesn’t feel good to sing that way.

The truth is, your body wants to sing without strain.

If singing doesn’t feel good, that’s your body telling you that you’re not doing it right.  With efficient technique, singing feels effortless. It doesn’t feel like work. In fact, it hardly feels like anything at all . . . . except really, really great!

If it feels like a whole lot of work, your body is signaling that you haven’t quite found the sweet spot of efficiency yet.

But have no fear! Finding the sweet spot of efficiency is not as elusive as it sounds.

One of the keys to the sweet spot is understanding what it means to be “grounded” in your body and in your support.

In today’s video, you can hear the before and after change in this talented singer’s sound as she works with the idea of being more grounded in her body.

She sounds pretty good in the before clip. But cultivating a more grounded support allows her to open up her resonance. So instead of the sound being trapped in her throat, the sound is able to ground down through her entire body which brings her to another level of singing that sounds even better, and more importantly, FEELS better to her.

And luckily, the best feeling and the best sound usually go hand in hand.

Watch the video and then today when you sing, be really present to where your energy is getting stuck and use this idea of grounding down to sing without strain and free up the phrase.